Pragati Aerospace Museum (also known as “Hindustan Aeronautics Limited Pragati Museum”) is situated outside the town of Nashik in India. In August 2001, HAL opened this museum to showcase their technical achievements and commendable journey. The models of air-crafts manufactured by HAL are kept here for display. The models are mounted on pylons. 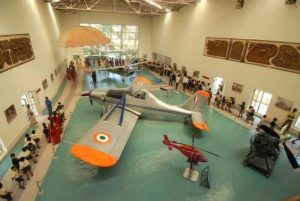 The aerospace museum is divided into two rooms. One room is showcasing pictorial history of HAL, including flight history, fighter plane technology, etc. And the other room contains some polished components of aircraft, mainly Sukhoi Su-30, Mig-21, and Mig-27.[2] Also a Mig-21’s pilot helmet and flight suit dating from 1963 are displayed here.

In Aug 2001, HAL Ozhar opened up a small museum called the Pragathi Aerospace Museum. Though not a full fledged museum with aircraft as exhibits, a MiG-21 was reported on display outside this museum located in the town center. 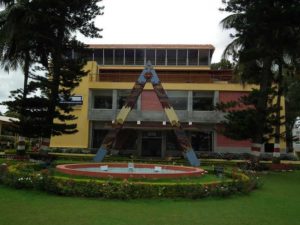 The area also houses Two MiG-21s mounted on Pylons. Though initially we thought that no way can any of these two be an FL, Rishi Tandon in his sighting report has indicated that these aircraft are serialled C-2836 and C-1175. The significance of both these serials has not struck us till we consulted our MiG Serial registry and found out that both represent the last aircraft of the type built. C-1175 is the last FL and C-2836 is believed to be the last Bis. The presence of the Bis, which should be the last ever MiG-21 model built in India and thus probably had quite some of its TTL left is not explained. Both aircraft are pylon mounted near a traffic roundabout. 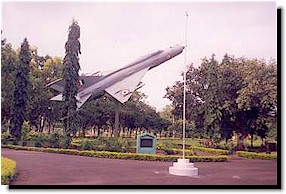