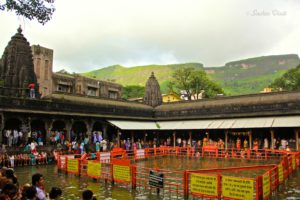 There is an interesting account explaining the significance of the place. Sage Gautam once committed a sin of killing a cow. As an act of repentance, He performed penance at the peaks of the Brahmagiri Mountains, appeased Lord Shiva and asked for the Ganga waters so that he could wipe off his sin. Pleased with his devotion, Lord Shiva jerked His big locks of matted hairs on the Brahmagiri Mountains and sent Ganga down onto the earth. Today that place is known as Gangadwar, situated half way to the Brahmagiri Mountains. There is a temple of Ganga, now known as Godavari River. Ganga appears first time here, after which it vanishes. 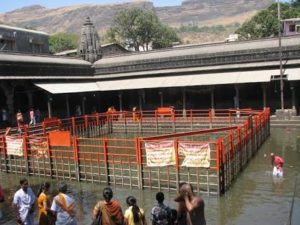 But the flow of the Ganges was tremendous due to which the sage could not bathe in her waters. He then surrounded the river with Kusha, a type of grass and put a stop to her flow. After bathing here his sin of killing a cow was finally wiped off. The tirth (pilgrimage) came to be known as Kushavart.
Thus today, Kushavart is known as the symbolic origin of the River Godavari. It is from this Kushavart that the river Godavari flows up to the sea. There are temples at the four corners of Kushavart. 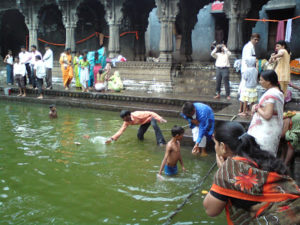