Vinayak Damodar Savarkar (28 May 1883 – 26 February 1966) was an Indian freedom fighter, politician, lawyer and writer,known for his activism for Indian independence. Savarkar popularized the term Hindutva (Hinduness), previously coined by Chandranath Basu, to create a collective “Hindu” identity as an essence of Bharat (India). Savarkar was also a pragmatic practioner of Hindu Philosophy. He insisted for validating religious myths/blind faith against the test of modern science. In that sense he also was a rationalist and reformer. 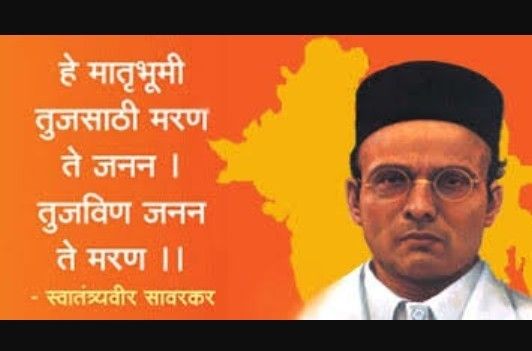 Savarkar’s revolutionary activities began while studying in India and England, where he was associated with the India House and founded student societies including Abhinav Bharat Society and the Free India Society, as well as publications espousing the cause of complete Indian independence by revolutionary mean. Savarkar published The Indian War of Independence about the Indian rebellion of 1857 that was banned by British authorities. He was arrested in 1910 for his connections with the revolutionary group India House. Following a failed attempt to escape while being transported from Marseilles, Savarkar was sentenced to two life terms of imprisonment totaling fifty years and was moved to the Cellular Jail in the Andaman and Nicobar Islands, but released in 1921 after several mercy petitions to the British government.

While in prison, Savarkar wrote the work describing Hindutva, espousing what it means to be a Hindu, and Hindu pride, in which he defined as all the people descended of Hindu culture as being part of Hindutva, including Buddhists, Jains and Sikhs. In 1921, under restrictions after signing a plea for clemency, he was released on the condition that he renounce revolutionary activities. Travelling widely, Savarkar became a forceful orator and writer, advocating Hindu political and social unity. Serving as the president of the Hindu Mahasabha, Savarkar endorsed the idea of India as a Hindu Rashtra and opposed the Quit India struggle in 1942, calling it a “Quit India but keep your army” movement. He became a fierce critic of the Indian National Congress and its acceptance of India’s partition. He was accused of the assassination of Mahatma Gandhi but acquitted by the court. 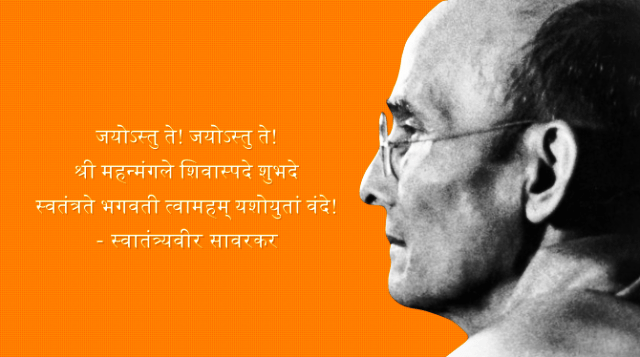 Vinayak Damodar Savarkar was born in the Marathi Chitpavan Brahmin Hindu family of Damodar and Radhabai Savarkar in the village of Bhagur, near the city of Nashik, Maharashtra. He had three other siblings namely Ganesh, Narayan, and a sister named Maina. He earned the nickname “Veer” (Sanskrit:braveheart) when at the age of 12, he led fellow students against a rampaging horde of Muslims that attacked his village. Highly outnumbered, he inspired the boys to fight-on until the last Muslim was driven off. Later, he is known to have stated: “Do not fear them. The Almighty is your strength, so fight, even when facing an enemy stronger than yourself”.

After the death of his parents, the eldest sibling Ganesh, known as Babarao, took responsibility for the family. Babarao played a supportive and influential role in Vinayak’s teenage life. During this period, Vinayak organised a youth group called Mitra Mela (Band of Friends) and encouraged revolutionary and nationalist views of passion using this group. In 1901, Vinayak Savarkar married Yamunabai, daughter of Ramchandra Triambak Chiplunkar, who supported his university education. Subsequently, in 1902, he enrolled in Fergusson College, in Pune . As a young man, he was inspired by the new generation of radical political leaders namely Bal Gangadhar Tilak, Bipin Chandra Pal and Lala Lajpat Rai along with the political struggle against the partition of Bengal and the rising Swadeshi campaign. After completing his degree, nationalist activist Shyamji Krishna Varma helped Vinayak to go to England to study law, on a scholarship. It was during this period that the Garam Dal, literally “Army of the angry,” was formed under the leadership of Tilak as a result of a split between the moderate, “constitutionalist” wing on the one part, and of Tilak’s extremist or radical wing in the Indian National Congress. The members of the Garam Dal did not acknowledge the agenda of the majority moderate Indian National Congress leadership which advocated dialogue with the British rulers and incremental steps towards Independence by gaining the confidence of the British. Tilak was soon imprisoned for his support of revolutionary activities. 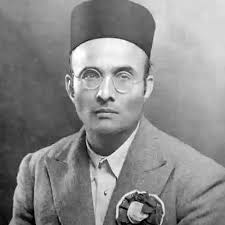 We must stop complaining about this British officer or that officer, this law or that law. There would be no end to that. Our movement must not be limited to being against any particular law, but it must be for acquiring the authority to make laws itself. In other words, we want absolute independence.

Savarkar envisioned a guerrilla war for independence along the lines of the famous war for Indian independence of 1857. Studying the history of the revolt, from English as well as Indian sources, Savarkar wrote the book, The History of the War of Indian Independence. He analysed the circumstances of 1857 uprising and assailed British rule in India as unjust and oppressive. It was via this book that Savarkar became one of the first writers to allude the uprising as India’s “First War for Independence.”

The book was banned throughout the British Empire. Madame Bhikaji Cama, an expatriate Indian revolutionary obtained its publication in the Netherlands, France and Germany. Widely smuggled and circulated, the book attained great popularity and influenced rising young Indians. Savarkar was studying revolutionary methods and he came into contact with a veteran of the Russian Revolution of 1905 who imparted him the knowledge of bomb-making. Savarkar had printed and circulated a manual amongst his friends on bomb-making and other methods of guerrilla warfare.

In 1909, Madan Lal Dhingra, a keen follower and friend of Savarkar, assassinated Sir William Hutt Curzon Wyllie in a public meeting. Dhingra’s action provoked controversy across Britain and India, evoking enthusiastic admiration as well as condemnation. Savarkar published an article in which he all but endorsed the murder and worked to organize support, both political and for Dhingra’s legal defence.

At a meeting of Indians called for a condemnation of Dhingra’s deed, Savarkar protested the intention to condemn and was drawn into a hot debate and angry scuffle with other participants. A secretive and restricted trial and a sentence awarding the death penalty to Dhingra provoked an outcry and protest across the Indian student and political community. Strongly protesting the verdict, Savarkar struggled with British authorities in laying claim to Dhingra’s remains following his execution. Savarkar hailed Dhingra as a hero and martyr, and began encouraging revolution with greater intensity.

Arrest in London and Marseille
In India, Ganesh Savarkar had organised an armed revolt against the Morley-Minto reforms of 1909. The British police implicated Savarkar in the investigation for allegedly plotting the crime. Hoping to evade arrest, Savarkar moved to Madame Cama’s home in Paris. He was nevertheless arrested by police on 13 March 1910. In the final days of freedom, Savarkar wrote letters to a close friend planning his escape. Knowing that he would most likely be shipped to India, Savarkar asked his friend to keep track of which ship and route he would be taken through.[citation needed] When the ship SS Morea reached the port of Marseille on 8 July 1910, Savarkar escaped from his cell in the hope that his friend would be there to receive him in a car.[citation needed] But his friend was late in arriving, and the alarm having been raised, Savarkar was re-arrested.
Case before the Permanent Court of Arbitration
Savarkar’s arrest at Marseilles caused the French government to protest to the British, arguing that the British could not recover Savarkar unless they took appropriate legal proceedings for his rendition. The dispute came before the Permanent Court of International Arbitration in 1910, and it gave its decision in 1911. The case excited much controversy as was reported by the New York Times, and it considered it involved an interesting international question of the right of asylum.

The Court held, firstly, that since there was a pattern of collaboration between the two countries regarding the possibility of Savarkar’s escape in Marseilles and there was neither force nor fraud in inducing the French authorities to return Savarkar to them, the British authorities did not have to hand him back to the French in order for the latter to hold rendition proceedings. On the other hand, the tribunal also observed that there had been an “irregularity” in Savarkar’s arrest and delivery over to the Indian Army Military Police guard.

Trial and Sentence
Arriving in Bombay, Savarkar was taken to the Yervada Central Jail in Pune. The trial before the special tribunal was started on 10 September 1910. One of the charges on Savarkar was he abetted murder. Following a trial, Savarkar, aged 28, was convicted and sentenced to 50-years imprisonment and transported on 4 July 1911 to the infamous Cellular Jail in the Andaman and Nicobar Islands. He was not considered by the British government as a political prisoner.

Prisoner in Cellular Jail in Andaman
His fellow captives included many political prisoners, who were forced to perform hard labour for many years. Reunited with his brother Ganesh, the Savarkars nevertheless struggled in the harsh environment: Forced to arise at 5 am, tasks including cutting trees and chopping wood, and working at the oil mill under regimental strictness, with talking amidst prisoners strictly prohibited during mealtime. Prisoners were subject to frequent mistreatment and torture. Contact with the outside world and home was restricted to the writing and mailing of one letter a year. In these years, Savarkar withdrew within himself and performed his routine tasks mechanically. Obtaining permission to start a rudimentary jail library, Savarkar would also teach some fellow convicts to read and write.

Leader of the Hindu Mahasabha
In the wake of the rising popularity of the Muslim League led by Muhammad Ali Jinnah, Savarkar and his party began gaining attraction in the national political environment. Savarkar moved to Bombay and was elected president of the Hindu Mahasabha in 1937, and would serve until 1943. The Congress swept the polls in 1937 but conflicts between the Congress and Jinnah would exacerbate Hindu-Muslim political divisions. Jinnah derided Congress rule as a “Hindu Raj”, and hailed 22 December 1939 as a “Day of Deliverance” for Muslims when the Congress resigned en masse in protest when the British India Governor-General declared India’s inclusion into World War II for the United Kingdom and its allies against Germany and its allies. Savarkar’s message of Hindu unity and empowerment gained increasing popularity amidst the worsening communal climate.

Savarkar as president of the Hindu Mahasabha, during the Second World War, advanced the slogan “Hinduize all Politics and Militarize Hindudom”, he decided to support the British war effort in India seeking military training for the Hindus. When the Congress launched the Quit India movement in 1942, Savarkar criticised it and asked Hindus to stay active in the war effort and not disobey the government, he urged the Hindus to enlist in the armed forces to learn the “arts of war”. Hindu Mahasabha activists protested Gandhi’s initiative to hold talks with Jinnah in 1944, which Savarkar denounced as “appeasement.” He assailed the British proposals for transfer of power, attacking both the Congress and the British for making concessions to Muslim separatists. Soon after Independence, Dr Shyama Prasad Mookerjee resigned as Vice-President of the Hindu Mahasabha dissociating himself from its Akhand Hindustan plank, which implied undoing partition.