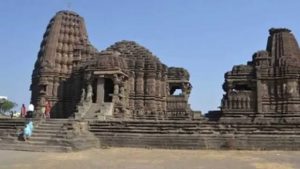 Gondeshwar temple is a very beautiful temple built in the Hemadpanthi style of Architechture. During the Adilshahi rule in Maharastra, Ahmednagar was the capital. One of the pradhans (minister) of Ahmednagar was Hemadpanth who popularised a typical style of construction using locally available black stone and lime. This style became very popular and came to be known as the Hemadpanthi style. The Gondeshwar temple is one of the few structures of this style still in good shape.

The masterpiece of architecture represents the Shaiva-Panchayatan which has main & central abode of Lord Shiva surrounded by temples of Mata Parvati, Lord Ganesha, Lord Vishnu & Surya – the Sun god. This marvel in stone is the largest & complete example of the mediaeval temples of the Deccan for the Indo-Aryan style.

Once you enter in the temple compound through the gate, marvelous group of temple built on the stage fills your eyes with joy. Built in the perfect proportion, the temple showcases divinely beautiful carvings in stone and it’s truly unique design. The temple complex was built on a raised platform to facilitate circumambulation (Pradakhshina) and also provides a wonderful view of the sculptures all around the walls of the shrines. 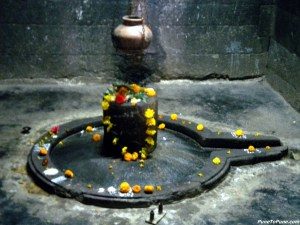 The temple is an astonishing display of stone carvings and sculptures portraying the stories from the Puranas, Mahabharata & Ramayanas. Sculptures of Gods, Goddesses, Apsaras, Yakshas,Kinnaras & Gandharvas ornaments entire complex. Gondeshwar Shiva LingamThe main shrine of Lord Shiva is beautifully proportioned and consists of an assembly hall (Sabha-Mandapa). Shiva Lingam is enshrined by a towered ceiling (Gabhara). This temple which is located in the center consists of three impressive and pillared porches at the entrance. The pillared hall carved with tortoise, the Kurma Avatar of Lord Vishnu, on the ground is small but elegant. Facing the main entrance is a Nandi pavilion housing a stone bull which is the mount (Vahan) of Lord Shiva. The design of the temple and the tower (Shikhara)differentiate Gondeshwar Temple from any other Indo-Aryan temples.